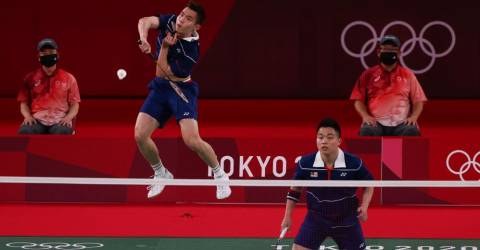 TOKYO: Malaysia’s dream of a gold medal in badminton was dashed after national men’s doubles pair Aaron Chia-Soh Wooi Yik fell to the might of China’s Li Jun Hui-Liu Yu Chen in the semi-finals of the 2020 Tokyo Olympics today.

Having disposed of Indonesian world number one Marcus Fernaldi Gideon-Kevin Sanjaya Sukamuljo in the last eight Thursday (July 29), the Malaysians failed to keep the momentum going and fell 22-24, 13-21 to Jun Hui-Yu Chen in 38 minutes at the Musashino Forest Sport Plaza here.

But the Chinese pair did not have it easy in the first game as the Malaysians led for the most part before finding themselves level on scores for four points from 19-19.

In the second game, the third-seeded Chinese pair stepped up a gear with a more aggressive style of play to force the Malaysian pair into making a series of mistakes for easy points.

Trailing 7-11 at one point, Aaron-Wooi Yik tried to find a way back but, in the end, the Chinese pair were unshakeable as they closed out the game, and the match, at 21-13.

However, Aaron-Wooi Yik can still deliver Malaysia’s first medal at the Tokyo Olympics when they meet Indonesia’s Mohammad Ahsan-Hendra Setiawan in the bronze-medal playoff Saturday (July 31).