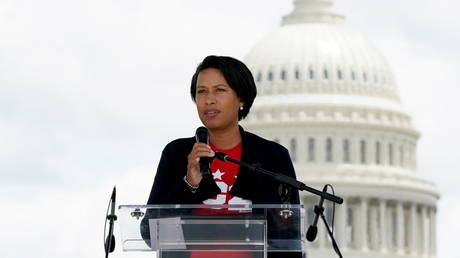 Washington DC Mayor Muriel Bowser is the latest politician to be labeled a hypocrite after critics saw red over a maskless photo of her with comedian Dave Chappelle taken shortly before her mandate took effect.

The photo includes Bowser, Chappelle, district deputy mayor for planning and economic development John Falcicchio, and two others. No one is wearing a mask.

“[Dave Chappelle] reopened [The Anthem] on Friday night!” Falcicchio captioned the photo with.

Masking was already required at the venue “at all times,” but Facicchio did not say whether it was taken on the grounds of The Anthem or elsewhere. Bowser, however, announced on Thursday that every person over two must be masking indoors, regardless of their vaccination status.

The mandate went into effect on Saturday morning, meaning the photo was taken hours before the new guidance kicked in.

Another photo posted to Instagram – later deleted, but saved in screenshots – also showed what appeared to be a massive – and maskless – celebration of Bowser’s upcoming birthday on the night the photo was taken.

DC is only the latest city to reinstate mask mandates in response to slowing vaccination rates and spiking cases.

“We will continue to do what is necessary to keep DC safe,” Bowser said when announcing the mask mandate.

The Centers for Disease Control and Prevention (CDC) also recently reversed its mask guidance, saying only weeks after announcing vaccinated individuals could drop pandemic-era precautions that things like indoor masking are still necessary in areas where cases are going up, a trend health experts have attributed to the delta variant.

Critics, however, have argued that masks provide little protection compared to vaccination and the reinstatement of mask mandates could lead to further lockdowns, something that could be economically detrimental to businesses that have struggled through the pandemic.


Politicians like Bowser have especially come under fire for sending the opposite message to the one they are preaching publicly.

The mayor’s celebrity photo was ripped into by critics, many of whom used it as prime proof that the mayor’s new mandate is “not about public health.”

“Mayor Bowser made the mask mandate Saturday so she and the deputy mayor could get this maskless picture with Dave Chappelle last night,” Fox News’ Cameron Cawthorne tweeted.

“Perhaps an answer to the question of why the DC mask mandate only went back into effect this morning,” Washington Examiner’s Jerry Dunleavy similarly added.

Here’s the clown Mayor of DC not obeying her own mask orders tonight after she just made them yesterday.Stop listening to her. pic.twitter.com/vSHSWeJfQK

In November, @MurielBowser broke her travel restrictions to party with Biden in Delaware.Now, she’s reimposing citywide mask mandates despite no significant rise in deaths, but not before she celebrates her birthday with a DJ & Dave Chapelle. This isn’t about public health. https://t.co/flfLDZzA86

Bowser has not directly commented on the photos, but she did celebrate Chappelle’s Friday evening show as part of the city reopening after a year of lockdowns.

“Washingtonians have waited months to be able to enjoy shows like this one again, and it makes it even sweeter to be able to reopen one of our favorite venues with a performance from one of the world’s most beloved comedians and a DC native, Dave Chappelle,” she wrote in a statement.

Bowser was also releasing public messages on Friday urging other DC residents to mask up yet again.

Let’s stay in this together, DC. By masking up, we can protect our community and keep DC open. Read the latest mask guidance: https://t.co/PsVCaHcKad

The mayor was also accused of breaking her city’s Covid-19 restrictions in November when she traveled to Joe Biden’s presidential victory speech in Delaware at the time, a trip her office described as “essential travel” despite criticisms.