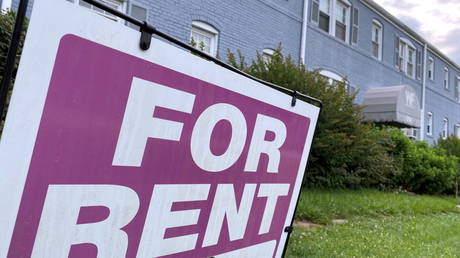 Millions of Americans face imminent homelessness, after Democrats left Washington without extending an eviction moratorium, set to expire on Saturday. However, America’s largest corporate landlords are about to make a killing.

An 11-month eviction moratorium that prevented tens of millions of Americans from losing their homes during the coronaviru-induced economic shutdown expires on on July 31, after Congress left Washington for recess without passing a bill to extend it.

The moratorium was put in place by the Donald Trump administration last year and extended by the Joe Biden administration in June, but a Supreme Court ruling that same month stated that further extension would require “clear and specific congressional authorization.” President Biden asked his allies in Congress this week to pass a bill extending the eviction ban, and House Democrats had enough votes to do so, but nevertheless didn’t. House Speaker Nancy Pelosi put the failure down to not having “enough time to socialize it within our caucus as well as to build the consensus, especially in a time of Covid.”


Pelosi’s typically Washingtonian answer will do little to assuage the millions of Americans behind on their rent. A precise figure here is hard to nail down, but Moody’s estimates that six million tenants are in arrears, while more than 3.5 million people told the US Census Bureau earlier in July that they face eviction within the next two months. As of Saturday, they are no longer protected from being turfed out onto the streets.

The moratorium also applied to homeowners behind on their mortgages and facing foreclosure, two million of them to be precise, according to figures from Harvard University.

Eight million homes may soon be vacant, and some of America’s largest corporate landlords are likely waiting to snap them up. Staggeringly wealthy pension funds like BlackRock and Blackstone have spent the pandemic buying up homes, often at well over market price, with a view to renting them out to the same Americans now priced out of the market. The eviction moratorium was a double-edged sword in some cases, with small-time ‘mom and pop’ landlords unable to collect rent from their tenants facing no choice but to sell to BlackRock and its ilk.

This process has been underway since the 2008 economic downturn, and beyond the borders of the US. The UN in 2019 accused Blackstone of “wreaking havoc with tenants’ right to security and contributing to the global housing crisis.”

Also on rt.com
Private equity and public ignorance – how US society is obediently destroying itself and enriching those at the top in the process


This time, they’re eyeing the market atop even bigger war chests. BlackRock, for instance, was hired by the Federal Reserve last year to buy up mortgages on its behalf, ostensibly to shore up the US economy from the virus-induced downturn. The Fed turned to BlackRock in 2008 as well, and the partnership proved lucrative. BlackRock now manages more than $7 trillion in assets, up from $1.3 trillion at the time of the last economic crisis.

The American middle class still holds more than double the wealth of the top one percent of the country, and home ownership is universally recognized as the first step toward acquiring membership in this class. The US government has long acknowledged this, with the Department of Housing and Urban Development stating all the way back in 2004 that buying a house can be the “most important source of wealth accumulation and ultimate financial security” for lower-middle income families.

Put simply, a nation of renters is not a financially secure nation, and when corporate landlords buy up houses to rent indefinitely and in doing so price independent buyers out of the market, they’re redistributing wealth from the middle class to the fraction of a percent at the top.

Opposition to the eviction moratorium has been loud, and has come from the left and the right alike. Progressives like Missouri Rep. Cori Bush (D) and Minnesota Rep. Ilhan Omar (D) staged a sleep-out on the steps of the Capitol on Friday night to protest their fellow Democrats’ apparent indifference to passing a moratorium extension. These progressives have repeatedly called for mass rent relief and government-subsidized housing, claiming “housing is a human right.”

Good morning. The eviction moratorium expires tonight at midnight. We could have extended it yesterday, but some Democrats went on vacation instead.We slept at the Capitol last night to ask them to come back and do their jobs.Today’s their last chance. We’re still here. pic.twitter.com/vnwIrAokll

The populist right, as distinct from the more traditional pro-business Republicans in Congress, have focused their anger on BlackRock and Blackstone, for their role in denying ordinary Americans a share in the country’s wealth.

It’s our moral duty and responsibility to stand up for the American workers. BlackRock and others continue to buy up as much land as possible as our citizens become serfs. To #SaveAmerica we need #AmericaFirst populists to represent our people. pic.twitter.com/NTjQNx96N6

And then Blackrock will buy the property and rent to you. You will own nothing and eat bugs. Welcome to the Great Reset. Funny how COVID happen to come along just at the right time. https://t.co/Xh9MhJyxAM

Curiously, no political will seemingly exists to fight the corporate-backed dehousing of America. Republicans who profess to defend the freedom of America’s middle class have remained largely silent, all the stranger given the fact that a nation of renters falls right in line with the World Economic Forum’s ‘Great Reset’ initiative, an ambitious plan to reshape the world’s post-pandemic economy into one where the average citizen “owns nothing.” Incidentally, BlackRock CEO Larry Fink is a trustee of the WEF.

Also on rt.com
US investment giants buying homes and the MSM telling us we should rent – this ‘new normal’ spells the death of the American Dream


Democrats aren’t putting up any opposition either. Explaining the lack of a vote on Friday, Speaker Pelosi said that “[Democrats] only learned of this yesterday,” a bizarre statement given the fact that the end of the moratorium had been expected for a month. And though Biden appealed to Congress to pass the bill, it is difficult to take this appeal seriously given the staffing pipeline between BlackRock and the Biden administration.

And, while Biden on Friday called on states to use federal funding from the American Rescue Plan to bail out renters, these efforts have been piecemeal thus far. For now, many Americans falling behind on their rent are on their own.