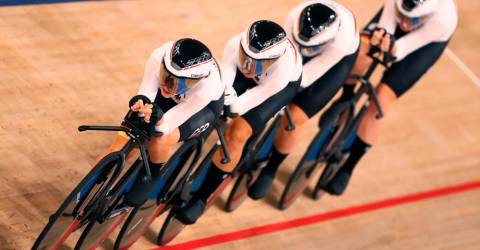 SHIZUOKA: Germany broke the women’s team pursuit world record for the second time in two days on Tuesday to set up a blockbuster final against Great Britain for the gold medal at the Izu Velodrome.

Germany’s Franziska Brausse, Lisa Brennauer, Lisa Klein and Mieke Kroeger posted a time of 4min 06.159sec, which was even quicker than the mark of 4:07.307 they set on Monday.

Britain had briefly reclaimed the record on Tuesday with a blistering time of 4:06.748 but it stood for a matter of minutes before Germany went faster again.

Germany saw off Italy while Britain beat the United States and the two form teams will go head to head for the gold medal later on Tuesday.

British pair Katie Archibald and Neah Evans crashed into each other just after their race finished but neither appeared seriously hurt.

Britain, led by Laura Kenny, are looking to win their third consecutive gold in women’s team pursuit after victories in Rio and London but Germany have been more impressive so far in Japan.

They finished third at the world championships last year and are aiming to win their first ever Olympic medal in the event. – AFP